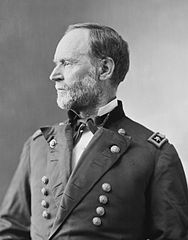 “I am sick and tired of war. Its glory is all moonshine. It is only those who have neither fired a shot nor heard the shrieks and groans of the wounded who cry aloud for blood, for vengeance, for desolation. War is hell.”
From “On Killing” by Lt. Col. Dave Grossman

“An Army is a collection of armed men obliged to obey one man. Every change in the rules which impairs the principle weakens the army”
– William Tecumseh Sherman

“War is cruelty. There’s no use trying to reform it, the crueler it is the sooner it will be over.”
– William Tecumseh Sherman

“War is the remedy that our enemies have chosen, and I say let us give them all they want.”
– General William T. Sherman

“A battery of field artillery is worth a thousand muskets.”
– General William Tecumseh Sherman Quotes

“I will accept no commission that would tend to create a rivalry with Grant.
I want him to hold what he has earned and got.
I have all the rank I want”
– General of the Army William Tecumseh Sherman Quotes
in a letter to his brother in 1865