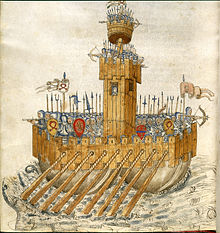 “Si vis pacem, para bellum”
(“If you want peace, prepare for war!”)
– Attrinbutet to Flavius Vegetius Renatus
From Epitoma rei militari, but the actual meaning of quote may be even older then that, maybe dating as far back as from Plato

“Romans not only easily conquered those who fought by cutting, but mocked them too. For the cut, even delivered with force, frequently does not kill, when the vital parts are protected by equipment and bone. On the contrary, a point brought to bear is fatal at two inches; for it is necessary that whatever vital parts it penetrates, it is immersed. Next, when a cut is delivered, the right arm and flank are exposed. However, the point is delivered with the cover of the body and wounds the enemy before he sees it. … However, they are given that double-weight shield frame and foil, so that when the recruit takes up real, lighter weapons, as if freed from the heavier weight, he will fight in greater safety and faster. But when field training was ended through negligence and laxity, the equipment (which the soldiers seldom put on) began to be seen as heavy.”
– Flavius Vegetius Renatus (in Epitoma Rei Militari, ca. 390)

“Few men are born brave. Many become so through training and force of discipline”
– Flavius Vegetius Renatus

“Men are seldom born brave but they acquire courage through training and discipline – a handful of men inured to war proceed to certain victory; while on the contrary numerous armies of raw and undisciplined troops are but multitudes of men dragged to the slaughter.”
– Flavius Vegetius Renatus

“To seduce the enemies soldiers from their allegiance and encourage them to
surrender is of special service, for an adversary is more hurt by desertion
than by slaughter.”
– Flavius Vegetius Renatus quotes

“When men find they must inevitably perish, they willingly resolve to die
with their comrades and with their arms in their hands”
– Flavius Vegetius Renatus quotes