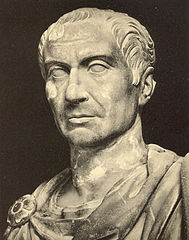 Julius Caesar Quotations
Gaius (Caius) Julius Caesar
Dictator of the Roman Republic. Reign October 49 BC – 15 March 44 BC. Caesar was assassinated by a group of rebellious senators led by Marcus Junius Brutus.
Lived: 100 BC – 44 BC
(click here to learn more about Julius Caesar)

“Veni, vidi, vici.”
(I came, I saw, I conquered)
– Julius Caesar
In Plutarch “Life of Caesar”, said after the defeat of Pharnaces at Zela in 47 BC
This is also said to have been the inscription he had on the sides of his platform which he used in his triumphal parade on his return to Rome. This plaque is likely the source of Plutarchs reasoning that he said it after the battle.

“Alea Iacta Est” or “Alea Jacta Est”
(“The Die is Cast”)
Attributed to Julius Caesar when he was crossing the Rubicon in 49 B.C.,
an action which provoked the start of the first Civil War.
This quote is also believed to have been, “Alea iacta esta” – The die will have been cast.
Once we cross this river, no turning back.

“If you must break the law, do it to seize power: in all other cases observe it.”
– Julius Caesar

“It is easier to find men who will volunteer to die, than to find those who
are willing to endure pain with patience.”
– Julius Caesar Quotes

“Men are nearly always willing to believe what they wish.”
– Julius Caesar

I can’t guarantee that these quotations are correct or true, but I have tried to verify as many of the quotes by Julius Caesar as possible.
Please contact me if you find any errors in the Julius Caesar quotes, have some additional information about them or if you know any quotations from Julius Caesar that are not listed here.
Submit your own quotes/quotations in our quotes forum