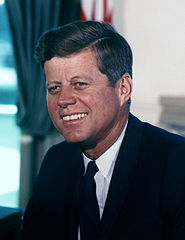 “Mankind must put an end to war, or war will put an end to mankind. War will exist until that distant day when the conscientious objector enjoys the same reputation and prestige that the warrior does today.”
– John F. Kennedy (JFK)

“Let every nation know, whether it wishes us well or ill, that we shall pay any price, bear any burden, meet any hardship, support any friend, oppose any foe, to assure the survival and success of liberty.”
– John F. Kennedy (JFK)

“I can imagine no more rewarding a career. And any man who may be asked in this century what he did to make his life worthwhile, I think can respond with a good deal of pride and satisfaction:
“I served in the United States Navy””
– John F. Kennedy (JFK)

“Change is the law of life. And those who look only to the past or the present are certain to miss the future.”
– John F. Kennedy quotes (JFK quotes)
Speech, Frankfurt, 25 June 1963.

“Today, every inhabitant of this planet must contemplate the day when this planet may no longer be habitable. Every man, woman and child lives under a nuclear sword of Damocles, hanging by the slenderest of threads, capable of being cut at any moment by accident, or miscalculation, or by madness. The weapons of war must be abolished before they abolish us.”
– John F. Kennedy quotes (JFK quotes)
In an address before the General Assembly of the United Nations on September 25, 1961

I can’t guarantee that these quotations are correct or true, but I have tried to verify as many of the quotes by John F. Kennedy as possible.
Please contact me if you find any errors in the John F. Kennedy quotes, have some additional information about them or if you know any quotations from John Fitzgerald Kennedy that are not listed here.
Submit your own quotes/quotations in our quotes forum