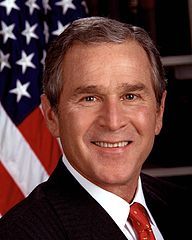 “Freedom itself was attacked this morning by a faceless coward. Freedom will be defended!”
– President George W. Bush Quotes, September 11, 2001

“For states that support terror, it is not enough that the consequences be costly-they must be devastating”
– George w. Bush at a speech at The Citadel, Dec 11, 2001.

“I gave them a fair warning”
– President George w. Bush,
Oct. 8 when deciding on military action against the Taliban

“We must take the battle to the enemy, disrupt his plans and confront the worst threats before they emerge.”
– President George W. Bush
to graduates of the U.S. Military Academy at West Point in June 2002

“What our enemies have begun, we will finish,”
– President George W. Bush
Quote from his address to the nation on September 11, 2002.

“Let’s go.”
Those were the words uttered by President Bush to Defense Secretary Donald Rumsfeld,
at 7:12 p.m. EST Wednesday 19. march 2003, that authorized the United States to begin war with Iraq

“this will not be a campaign of half measures, and we will accept no outcome except victory.”
– President George Bush, addressing the nation 20.march 2003

I can’t guarantee that these quotations are correct or true, but I have tried to verify as many of the quotes by George W. Bush as possible.
Please contact me if you find any errors in the George Bush quotes, have some additional information about them or if you know any quotations from George Bush that are not listed here.
Submit your own quotes/quotations in our quotes forum