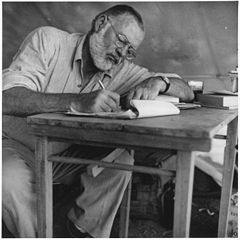 “Once we have a war there is only one thing to do. It must be won. For defeat brings worse things than any that can ever happen in war.”
– Ernest Hemingway

“For a war to be just three conditions are necessary – public authority, just cause, right motive.”
– Ernest Hemingway

“I know war as few other men now living know it, and nothing to me is more revolting. I have long advocated its complete abolition, as its very destructiveness on both friend and foe has rendered it useless as a method of settling international disputes.”
– Ernest Hemingway

“Never think that war, no matter how necessary, nor how justified, is not a crime.”
– Ernest Hemingway Quotes

“In modern war… you will die like a dog for no good reason.”
– Ernest Hemingway

I can’t guarantee that these quotations are correct or true, but I have tried to verify as many of the quotes by Ernest Hemingway as possible.
Please contact me if you find any errors in the Ernest Hemingway quotes, have some additional information about them or if you know any quotations from Ernest Miller Hemingway that are not listed here.
Submit your own quotes/quotations in our quotes forum