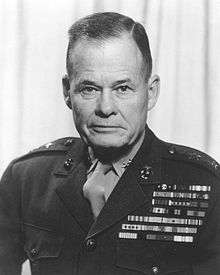 “We’re surrounded. That simplifies the problem.”
– Quote Attributed to Chesty Puller, USMC
(I have found three versions of this one)
The quotes may not be Chesty Pullers, but may instead have been said by General O.P.Smith

“They are in front of us, behind us, and we are flanked on both sides by an enemy that outnumbers us 29:1. They can’t get away from us now!”
– Lewis B. “Chesty” Puller, USMC
When the Marines were cut off behind enemy lines and the Army had written
the 1st Marine Division off as being lost because they were surrounded by 22
enemy divisions. The Marines made it out inflicting the highest casualty
ratio on an enemy in history and destroying 7 entire enemy divisions in the
process. An enemy division is 16500+ men while a Marine division is 12500 men.

“The mail service has been excellent out here, and in my opinion this is all that the Air Force has accomplished during the war.”
– Chesty Puller in a letter to his wife while in Korea

“Don’t forget that you’re First Marines! Not all the Communists in hell can overrun you!”
– Chesty Puller motivating his men at Chosin Reservoir

“Take me to the Brig. I want to see the “real Marines”.
– Major General Chesty Puller, USMC – while on a Battalion inspection.

“Our Country won’t go on forever, if we stay soft as we are now. There won’t be any AMERICA because some foreign soldiery will invade us and take our women and breed a hardier race!”
– Lt. Gen. Lewis B. “Chesty” Puller, USMC

When an Army captain asked him for the direction of the line of retreat, Col Puller called his Tank Commander, gave them the Army position, and ordered:
“If they start to pull back from that line, even one foot, I want you to open fire on them.”
Turning to the captain, Chesty Puller replied “Does that answer your question? We’re here to fight!” At Koto-ri in Korea
– Chesty Puller at Koto-ri in Korea
(Quote from “Marine: The Life of Chesty Puller” by Burke Davis)

“They are a damn site better than the U.S. Army, at least we know that they will be there in the morning.”
– Lewis B. Chesty Puller
when a journalist asked him about being surrounded by 22. enemy divisions

“There are not enough chinamen in the world to stop a fully armed Marine regiment from going where ever they want to go”
– Lewis B. “Chesty” Puller

I can’t guarantee that these quotations are correct or true, but I have tried to verify as many of the quotes by Lewis Burwell Chesty Puller as possible. Please contact me if you find any errors in the Chesty Puller quotes, have some additional information about them or if you know any quotations from Lewis B. “Chesty” Puller that are not listed here.
Submit your own quotes/quotations in our quotes forum